Harlequin Players is the advanced acting class at Eaglecrest High School.  Students in the class are chosen by audition.  Along with the school's main stage performances, Harlequin Players stage their own  productions.  December 2015 the Players traveled to elementary schools to teach them about bullying and how to prevent it.  The Players want to make a difference and  try to end the bullying cycle.  In April 2017, the harlequin players performed an adaptation of Edgar Lee Masters' Spoon River Anthology. It was student directed and written to bring an advanced piece to the stage. Fall of 2017 had the Players prepping and performing 3 versions of  Waiting for Godot  by Samuel Beckett.  There were 3 casts on 3 nights , each with an different interpretation of the absurdism of Beckett.  In Spring 2018, Harlequin Players put on a black box production of Hamlet by William Shakespeare.  A black box production is an interactive performance with  the audience sitting on stage.   Harlequin Players enjoy being close to  their audiences and leaving a lasting impression on them.  Covid provided the Players with some challenges, but the group was able to produce "The Killing Game." 2021 has brought a fresh new take on the class and the Players prepare their first ever Improv show! Players will also work on playwriting, advanced technical theatre skills, and One Acts. 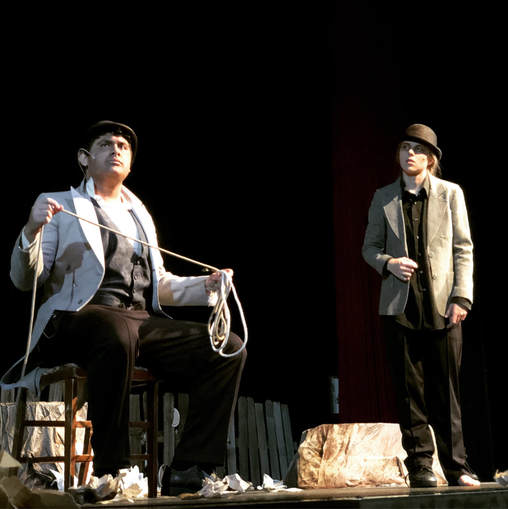