Eaglecrest was built in 1990.  The Theater Program has a long reputation of great productions.   Eaglecrest High School is a place of opportunity - where state champion athletes compete,  Advanced Placement scholars learn,  music and theater students perform, and  artists create - where all students have a place to succeed and the teachers believe in helping their students discover their dreams. - 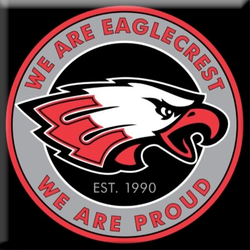 ﻿Eaglecrest High School entered their performance of Mary Shelley's Frankenstein into the CO State Competition.  To their surprise, they won the competition, and were able to perform at Thescon 2013; it was a great honor.  Thescon was truly an unforgettable experience for these students.

Andy Kelso:
Andy Kelso graduated from Eaglecrest in 1998.  At Ealgecrest, Kelso performed in Wayside Motor Inn, Into the Woods, Midsummer Night's Dream, Evita, Chess, Lost in Yonkers, The Outsider, etc.  He also assistant directed Charlie's Aunt with Jennifer Condreay.  Kelso studied Theater at UNC.  He has been seen on several broadway shows, including: Kinky Boots, Mamma Mia, Wicked 1st National Tour, Jacques Brel, The Drawer Boy, Two Rooms, Fiddler on the Roof, Footloose, and Big River.  Kelso's favorite role is Charlie in Kinky Boots.
Kimberly Avalos (Tedder):
Kimberly graduated from Eaglecrest in 1995.  She was known for her roles as Annie in Annie and Mary Lennox in The Secret Garden.  She took her performance of Mary Lennox to the National Thespian Competition in Lincoln, Nebraska.  She is a former teacher in Adams County School District (2004-2007.)  Avalos will received the Eaglecrest Hall of Fame award in 2015.
Gregory Treco:
Treco graduated in 1998.  While still at EHS,  he was able to travel with Theatre Department to perform in Paris.  He was known for helping with EHS's performance of Chess; which was also taken to the National Thespian Competition in Lincoln, Nebraska.  He studied Theatrics at Carnegie-Mellon University; graduated in 2002.  Treco was a choreographer for Broadway Rox.  Treco is now an actor at DCPA in Aurora, Colorado.  Treco was the first Eaglecrest student that made it on Broadway.  He will also received the Eaglecrest Hall of Fame award 2015.
Rachel Rincione:
Rincione, with three other students, won a vocal ensemble and was featured in the closing ceremony at the National Thespian Festival in Lincoln, Nebraska.  She is now performing on Broadway and can be seen in Les Miserables.
Lindsey Pesek:
Pesek graduated in 2011.  She served as the Thespian Board Secretary 2010-2011. Her role as Rosie Alvarez in Bye Bye Birdie earned her the "Best Actress" Senior Superlative, she also won the Monologue Competition in 2011. She studied Theatre Arts at Westminster College in Salt Lake City and continued her education receiving her Masters of Arts in Teaching in 2016. She returned to EHS as a full-time theatre teacher in Fall 2016 and has been teaching theatre and dance since.
Taylor Cozort:
Cozort graduated in 2015.  She was the Thespian President in 2013-2014 and 2014-2015.  She was a big influence on the department and has definitely left her mark on the EHS stage.   She is best known for her performance of Dotty in Noises Off.  She is now studying Theatre at The New School For Drama in New York City.
Sam Broome:
Sam graduated from EHS in 2017.  He was Thespian Troupe #4999 President from 2016 - 2017.  Sam alongside with his thespian board built the department and club back up from the ground.  Sam's favorite role he played at Eaglecrest was Richard in Where You Goin' Red Ryder, he also assistant directed The Dining Room 2016 and Little Shop of Horrors 2017.  He wants future EHS Theatre generations to stay true to traditions, have fun, make memories, and leave your mark on the stage.  "Never wake up wishing you had done something.  Make your dreams become a reality".  Sam is now studying Baking and Pastry at Johnson and Wales University.
*Over 100 former Eaglecrest students are working as professional artists*